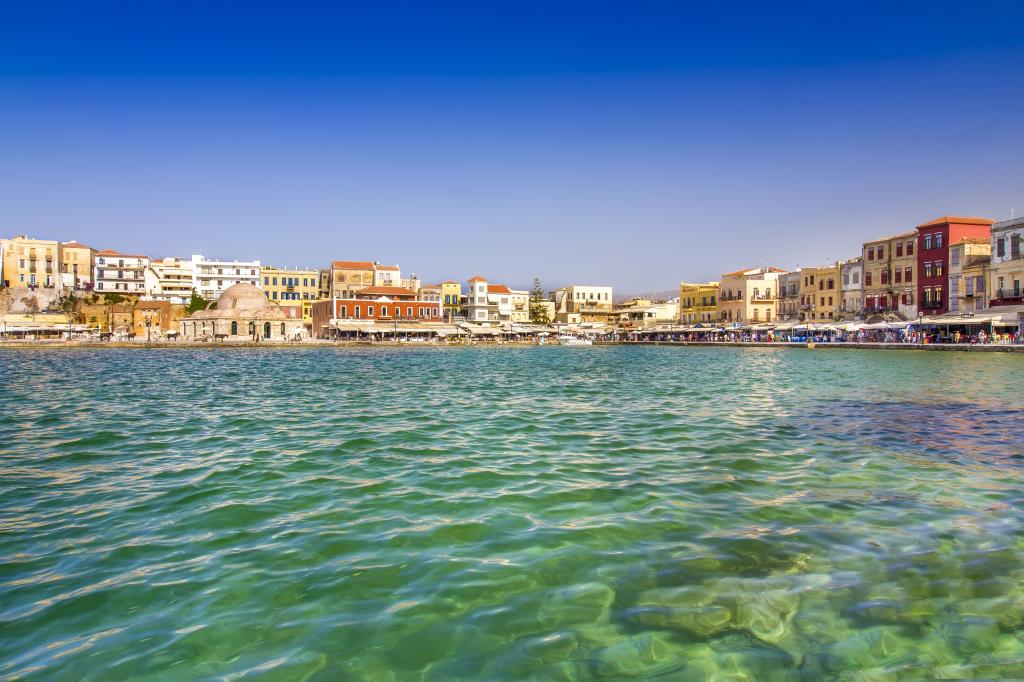 The Ηighlights Of Chania In Crete

Chania Highlights. Chania city is the second largest in Crete and the prettiest town of Crete, a place that you must visit if you travel to the West of Crete. Chania has been inhabited since neolithic times and the current town is built upon many layers of past civilizations.

Looking for accommodation in Chania? Check out these modern holiday villas!

1. The Old Port Of Chania In Crete

The Old Port of Chania was built by the Venetians around 1320. It is one of the best places to take a walk, with modern cafes, restaurants and old buildings converted in hotels. You can walk from the Navy museum to Giali Tzamisi with the imposing lighthouse in the background. The sea breeze, the impressive buildings and the numerous tourists, especially in summer, make this place one of the Chania Highlights.

2. The Lighthouse Of The Old Port In Chania

The Egyptian Lightouse which dominates the Old Port has a height of 21 m. and it is the oldest in the world. It was first constructed by the Venetians during the Venetian conquest of the island, but with the passage of time it suffered lots of damage.  More than 200 years passed, until the decade 1830-40, when the Egyptians reconstructed it according to the Egyptian architecture. The basis of the Lighthouse is shaped as an octagon, its middle part has 16 angles and its top is circular and looks like a minaret.

3. The Navy Museum In Chania

The characteristic red building which is a part of the fortress Firkas, is located on the edge of the Old Port and it is consisted of two floors with 2500 exhibits, classified by historical periods. By visiting the Navy Museum, you can see models of ships, a variety of naval equipment, such as barometers, magnetic compasses etc., paintings, portraits, authentic historical photographs, costumes and other mementos.

4. Stivanadika Street In The Old City Of Chania

Stivanadika street got its name from the several shops which many years ago produced the Cretans’ traditional boots called “stivania”. Today in Stivanadika you can buy folk art souvenirs, herbs, olive oil, jewels and leather products. Stivanadika is a great place for a walk in the afternoon which will make you feel like you made a journey back to time.

5. The Old Public Market In Chania

The first commercial market of the country (dated already 100 years), in the shape of a cross and according to the standards of the market of Marseille, opened in 1913 and was inaugurated by the famous Greek Minister Eleftherios Venizelos. Since 1980, this 4.000 s.m. building has been declared as a protected monument. Today in the Old Market, you may find 70 shops, which sell a variety of traditional products, traditional taverns and cafe’s.

6. The Cretan Knives Shop In Chania

The Cretan knife, as a symbol of the Cretans’ pride was shaped as we know it today, from the Turkish conquest and was established as an integral part of the Cretan costume. There are three basic types: “voskomahero” (the shepherd knife), “basalis” (the boss), and “saita” (the shuttle).

7. Harma Beer, The Beer Of Chania

Chania has its own…beer! The pure and natural beer “Harma” is created by Giannis Lionakis in 2007. It is fresh, without mechanical processing and preservatives, produced exclusively in Chania. Blond or black, absolutely tasteful and aromatic, it keeps the nutrients of the malt, which has high nutritional value.

8. Samaria Gorge – One of the best Chania Highlights

Samaria Gorge is one of many beautiful gorges in Crete and one of the major tourist attractions of Chania. The gorge has a length of 16 km, starting at an altitude of 1,250 m., in Chrysoskalo and ending on the shores of the Libyan Sea in Agia Roumeli. It is quite long (4 to 6 hours hiking), so you should be prepared for a quite rough route. The gorge was declared as a national park in 1962 mainly because it is a shelter for the rare Kri-Kri (Cretan Ibex).

The famous “Samaria” water has been produced since 1978 and got its name from the famous gorge. It stems from the highest sierra of Lefka Ori (White Mountains), it is filtered naturally and it’s one of the most salutary waters in the world. This year it was awarded in the second position between 125 participations globally.

Read also:  The Amazing Coves Of Marathi Beach In Crete

In a mountainous place, at an altitude of 850 m., in lack of electricity, Giorgos Garofalakis started in 1954, his family business. He started to produce refreshments with main ingredient, the natural water of spas, by using a secret recipe. So he blended the pure waters with local fruits and other natural ingredients. As a result, he produced Greek refreshments of unique taste: orange juice, lemon juice, tangerine juice, lemon soda, sparkling water, byral and ice tea. Τemenia refreshments are exported in many countries outside Greece.

10. The Legend Of Drosoulites – Chania Highlights

If you visit the south part of Chania you will probably hear about the myth of Frangokastelo, the famous Venetian castle of 1370 near Sfakia. Every year on 18 May, at dawn, according to the local myth, Drosoulites make their appearance. They are men in black, on their horses, with swords and helmets who seem to get directly to the ruined church of Agios Charalampos close to the castle. Regardless of whether it is a true story or just an illusion, this myth keeps its charm still in our days.

Hidden in the Public Park of the city, “Kipos” cafe is an ideal place to have a coffee break after a long walk in the city. It has handmade old furniture, French-made chairs and retro decoration that remind the Vienesse cafes. It hosts exhibitions, literary and gastronomic festivals and last year it inaugurated an exhibition with retro photos from Chania.

Aroma cafe is located next to Giali Tzami in the Old Port and is one of the most popular cafes not only for tourists but also for the locals. So you can enjoy a coffee, a refreshing drink or a meal in combination with the wonderful view of the lighthouse.

13. The Ancient City Of Aptera

If you follow the north national road from Chania to Rethymno, in a distance of 15 km from Chania, you will get to the ancient city Aptera, one of the most important cities of West Crete in ancient years. It was founded in the 7th century BC and destroyed in 823 AD by Saracen pirates. When you get there, you will see a sanctuary of goddess Dimitra, statues, inscriptions, tombstones and ceramics. You will also see the ruins of an ancient theatre, foundations of houses and coins.

14. The Tombs Of Venizelos Family In Chania

At east of the city, on the way to Akrotiri, there is an idyllic place in which the Greek Prime Minister Eleftherios Venizelos and his son Sofoklis are buried. He had chosen to be buried in this place, which have a breathtaking view to the city of Chania and the Old Port. There, you will have the chance to enjoy a wonderful view of the sunset and you can combine a nice romantic walk with a coffee or a drink in the two famous cafeterias Koukouvagia and Nymfes.

In Chania you are able to choose among a variety of beaches, most of them having fine sand and crystal waters. At the north coastal side of the city there are cosmopolitan beaches with beach bars (Agia Marina, Platanias, Kolympari, Loutraki, Marathi).

Exotic beaches with blue water, some of them wild and isolated (Falassarna, Paleochora, Kedrodasos). In Chania there are the two famous beaches with pink sand, Elafonissi and Balos, which have been included many times in the best beaches of the world.