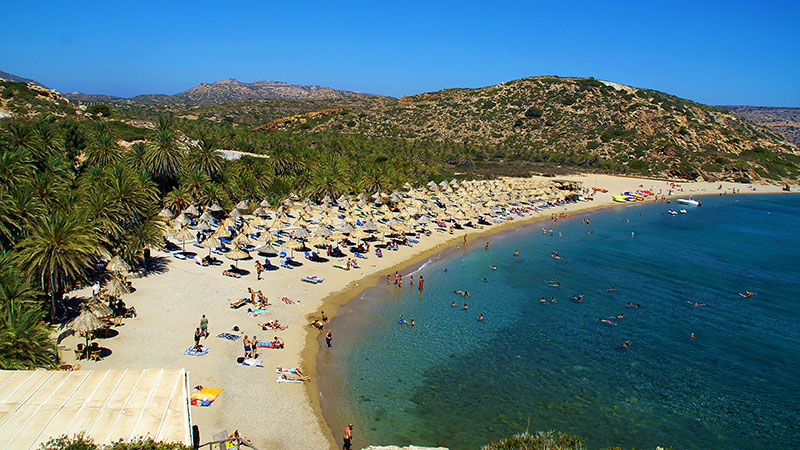 The Exotic Vai Beach And Palm Forest In Crete

Vai beach is 94km east of Agios Nikolaos and 24km east of Sitia, on the east coast of Crete. It is the most famous beach in eastern Crete. It’s main feature is the large palm forest of Theophrastus trees (Phoenix Theophrasti). The name “Vai” is another Greek name for the tree phoenix. The colony is the largest in Europe with about 5000 trees, while smaller colonies exist in other parts of Crete and the Canary Islands. According to legend, the palm trees sprouted from the seeds that pirates from Africa have thrown there.

The heavenly palm is sprouting in a large valley watered by the waters passing through it. At the exit of palm forest to the sea, there is an exotic sandy beach with fine sand. This beach, combined with the background of palm trees, is reminiscent of landscapes in Africa and Caribbean. The area belongs to the estate of the powerful monastery Toplou, which is the largest landowner in eastern Crete. In the monastery, which is built like a fortress, there is a stunning collection of Byzantine icons.

Vai was unknown until the early 1970s, when the popular ad of Bounty chocolate with coconut was filmed there, with the magical background of palm trees. In the advertisement, coconuts from palm trees were falling down. However, it was trick, as the trees of Theophrastus produce only dates. The ad made this unknown place famous throughout the world.

Thus, hippies displaced from Matala, began to come and spend their holidays in this earthly paradise. In the 1980s, when the fashion of hippies’ exceeded, the hippies gave way to campers who lived under the trees, messed up the beach and caused great ecological damage. That’s why Vai was declared as a protected area. So today, the fenced palm forest Vai is protected and the stay on the beach is forbidden.

The beach, as we said, has fine sand and blue waters. In a few places, when you enter, it has smooth rocks, while opposite there are small islets that beautify the landscape. The beach is organized with umbrellas, showers, water sports, canteens and a tavern. If you want to isolate yourself, there is a lovely sandy beach 5 ‘north of Vai, while another ideal option is Psili Ammos in the south. You could find a holiday villa with private pool in the extended area of Lasithi.

Vai is located 24km east of Sitia and about 6km from Palekastro. The route from Sitia is generally good and will not complicate you. It will take you about two hours to get from Heraklion to Sitia. From Sitia to Vai it is about 30 minutes. You have to follow the road to the Monastery of Toplou and then continue for 8 km until the palm forest. If you come from Rethymno you will need four hours to Vai, while from Chania you will need 4.5 to 5 hours. Shortly after Vai, you will find ancient Itanos or Erimoupoli, where excavations have brought to light many findings of the Minoan and Hellenistic period. If you are not in a hurry, it is worth a visit.

Vai beach and palm forest is one of the beaches you should definitely visit when you come for the first time in Crete.