The villa is a beautiful bungalow holiday villa located on the island of Crete near the town of Kyrianna. The surroundings are characterized by the astonishing nature and breathtaking views. The white beaches are only a few minutes from the villa. Kyrianna is set around 15 kilometers south east of Rethymnon.

The Villa is featuring two living spaces and is highly suited for two families or bigger groups. Both wings feature their own facilities so every family can enjoy their own privacy. The living room together with the kitchen connect both wings of the building. Here you can enjoy that well deserved holiday together.

The swimming pool together with the big garden make Villa Kyria the place for you to enjoy the relaxing atmosphere of Greek Living.

8-persons Villa Kyria is a beuatiful bungalow villa with its own private swimmingpool, breathtaking sea and mountain views. Surrounded by vineyards ald olive trees. Quit area, close to the picturesque village of Kyrianna in Crete. The perfect holiday for a large family or group of friends. Villa Kyria has been built in 2016.

The luxury Villa has a pool surface area of 40 square meters. The center of the villa is an open living room with an included kitchen. With opening doors leading to a broad patio. Both sides of the living room are suited with 2 bedrooms (1 room has a double bed and 1 room has 2 seperate beds), a bathroom and a toilet.

The villa is located on a big chunk of land with surface area of 1500 square meters.

Villa Kyria is owned by a dutch family who live near the city of Arnhem. You won't miss out on anything and you will be astonished by the Greek hhospitality and the extraordinary Greek culture.

Upon first entry of the villa you will be surprised with a 'Greek themed' welcome package.

When driving away from the house, take a right to Loutra (towards Rethymno), the first town next to Kyrianna. After having driven past the petrol station it should be at your left side.

In the town of Pigi you will find a small street next to the tavern directly at your right hand the local butcher. Delicious fresh meat, bread and a few other fresh products are available here.

The " Museum of ancient Eleutherna - Homer in Crete" , was created to accommodate the results of the excavations carried out for thirty years in the ancient city . ​

It is a modern building approximately 1,800 sq.m. which together with the surrounding area occupies 3 acres and remotely resembles ark that emerges from the earth, gazing Ida (Psiloritis).

It is divided into two wings with the right one on the ground floor for hosting the guards - ticketing area and the Study Centre in the left area of ​​the exhibition halls of the museum. The architectural project was designed on a human scale, related to the natural environment, while at the same time as modern edifice is absolutely distinct and recognizable of the era in which it was created.

In the Minoan time Knossos had probably been the capitol of Crete. Excavations in Knossos have been of uncountable values for the understanding and knowledge of the Minoan population. Currently Knossos is one of the most booked excursions on Crete, thousands of people visit the excavations of Knossos daily. Wherein the big Palace forms the major attraction, certain parts of the palace have been built up again. Parts of the Greek founding's around Knossos can be admired in the Archaeological museum in Heraklio.

The south western part of Crete counts around fifty ravines and gorges. The Samaria Gorge and the Imbro gorge are 2 of them. The trial in between the gorge has a length of around 16 kilometers which has a duration of around 4-6 hours. You walk from Omalos Plateau to the coastal town of Agia Roumeli. During the trial you spend time in the Iron Gates (the tightest part of the gorge) you will descend around 1250 meters. A good stamina and firm shoes are recommend for this trial.

The leprosy infected Kalidonia (Spinalonga) used to be an exile during the first half of the last century, where all leprosy patients were banished to. Isolated from the main population. Nowadays the Venetian fortress on the island a very important tourist attraction. You can reach Spinalonga by boat from the towns of Plaka, Elounda and Agios Nikolaos. Advised is to take around one hour to walk around the island, booking a guide will have you stay there much longer.

The archaeological museum of Heraklio is one of the most important museums of Crete. This museum, which was founded in 1883 currently has the most beautiful collection of art from the Minoan times. The museums also gives a good impression of how living on Crete used to be in different periods of time. In this museum you can along with much more, examine and admire the mystical Phaistos Disk.

The town of Vai is situated all the way in the north eastern part of Crete. Vai is well known due to the unique palm tree forest. The Cretan date palm is the last remainder of many natural palm tree forests which used to be around there in the past. Nowadays, it is a popular day trip under tourists who come there to sunbathe on the beach, swim, water ski and dive. The protected natural landscape does not come with sleeping facilities, while there are two taverns where you can eat and drink.

At around 800 meters above the sea level lies the Lassithi Plateau: A plateau with a surface of around 25 square kilometers. On the plateau you will find the cave of Zeus, where according to the legend this king god from the Greek mythology has been born. On the plateau you can furthermore see a big amount of typical windmills as seen in pictures of Crete and Greece.

FrangokástelloThe Venetian fortresses Frangokastello (castle of French) is nowadays a romantic castle ruin with a small town, small accommodations and a broad beach.

By culture lovers detested, but loved by the youth is the in Chersonissos situated waterpark Starbeach. Next to much fun in the water (slides, playgrounds and waterfun on water), Starbeach is a great place for Youth where they can party and meet up.

The Arkadi Monastery is in the center of the island of Crete. During the independence war between the Greeks and the Turks this monastery played a big role, meaning the current local population sees this as a tourist attraction. The museum at the monastery shows icons and portraits of independence warriors.

The old downtown of Chania together with the Venetian harbor is symbolized as one of the most atmospheric places on the island of Crete. In Chania we can find the longest harbor promenade of Crete, countless small streets and beautiful Venetian houses. Furthermore Chania counts a big number of excellent restaurants and taverns. For shopping lovers Chania is also the most suited. In these shops we can find countless of locals items such as carpets, leather work and handmade knives. If you want to buy fresh fish or fruit, you should take a peek in the market hall (Dimotiki Agorá). 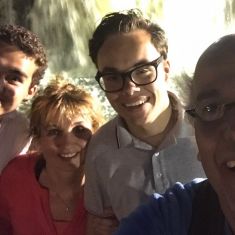 
We are big fans of Greece and the magics of the Island of Crete. For over 30 years we have spent our holidays here. With friends in the past, and nowadays with our family. We fell in love with the hospitality from the inhabitants, the great food and of course the fantastic climate. For our profession we organise culural, theatre and business events. We are very service minded. We wished to have a house built on this great island, to visit ourselves and to let others enjoy. Villa Kyria has been entirely designed along the ideas of our 2 teenage sons. The house cannot be more personal. The view is wide and breathtaking. The villa is surrounded by mountains and olive trees. And it can happen that a herd of sheep can come say hi to you.

We hope you'll enjoy it as much as we do and we wish you a fantastic stay.